Is Hollywood Warming Up to Magicians ?? 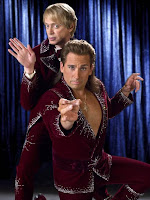 Case in Point.. 'OZ', The Incredible Burt Wonderstone', and 'Now You See Me..'
by Brian Alexander for USA TODAY..
Presto boffo! Hollywood's latest trick to conjure up big box-office numbers is to project the world of magic onto the big screen.
James Franco's turn as a magician/"wizard'' in Oz the Great and Powerful was just the beginning as the film earned a stupendous $80 million during its debut weekend last week.
On Friday, March 15th, Steve Carell will attempt a similar feat as he stars as a campy Las Vegas performer in The Incredible Burt Wonderstone. And on May 31, Dave Franco (James' younger brother), Jesse Eisenberg, Isla Fisher and Woody Harrelson join forces in Now You See Me, in which magicians use their collective abilities to pull off elaborate heists... Please click the link to visit USA TODAY and read the rest of the story.. Magicians.. this is OUR month.. enjoy it...  (photo.. John P Johnson and Warner Bros.)
http://www.usatoday.com/story/life/movies/2013/03/12/magicians-oz-burt-wonderstone/1971217/